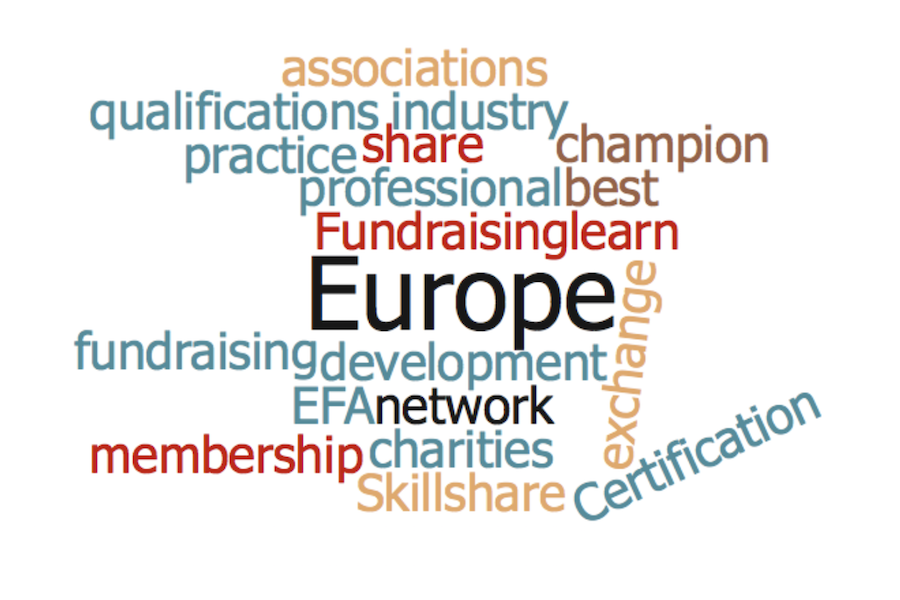 EFA was formed in Brussels, Belgium in 2002 after many years of discussion by fundraising associations and leading fundraisers from across Europe.

The European fundraising community saw a need for one central body to share knowledge and best practice, to champion fundraising at the highest level and to strengthen the industry with established qualifications.

But what's happened since then?

EFA was formally registered in 2004 in Amsterdam, with support from the Resource Alliance.

In 2006, EFA appointed Denise Dawes as part-time executive officer to support the work of the Association.

2007 saw the launch of EFA Certification and the subsequent development of a series of fundraising qualifications across Europe.

In 2008, EFA’s first Skillshare - an annual event that serves as a platform for exchange, where members can meet, explore best practice and learn from each other – took place in Berlin and was hailed as a great success. The EFA Skillshare continues to grow, having travelled to Barcelona, Krakow, Berlin, Vienna, Budapest and Paris, welcoming member fundraisers, observers and associates from across Europe.

In 2011, EFA hosted its first capacity building workshop in Vienna. Funded by the ERSTE Foundation, the workshop provided specific support for leaders of fundraising organisations in Central and Eastern European countries where no formal fundraising association has yet been established.

2012 - our 10th Anniversary year! In 2012, EFA celebrated with the launch of a new resource for members - Fundraising Europe is distributed by email through EFA's membership to around 10,000 fundraisers.

In 2013, EFA published A Decade of Change looking back on how fundraising had changed in recent years. EFA also supported the development of the world's first advanced fundraising qualification. Fundraising Europe was opened up to subscribers with an interest in European fundraising.

And in 2017, we celebrated fifteen years of EFA and our 10th annual Skillshare (in Berlin).

In 2020 we launched our new EFA Certification Framework.

Also in 2020, we broadened out EFA membership to include organisations beyond national fundraising associations.

In 2022 we celebrated our 20th anniversary! This year, we also launched the EFA Certification Advanced Framework, and established our Public Affairs Working Group.

Life at EFA never stands still. So, if you’d like to find out more, please get in touch.

Sign up to our free monthly news and features

We use cookies on our website to give you the most relevant experience by remembering your preferences and repeat visits. By clicking “Accept”, you consent to the use of ALL the cookies. Read More
Cookie settingsACCEPT
Manage consent

This website uses cookies to improve your experience while you navigate through the website. Out of these, the cookies that are categorized as necessary are stored on your browser as they are essential for the working of basic functionalities of the website. We also use third-party cookies that help us analyze and understand how you use this website. These cookies will be stored in your browser only with your consent. You also have the option to opt-out of these cookies. But opting out of some of these cookies may affect your browsing experience.
Necessary Always Enabled
Necessary cookies are absolutely essential for the website to function properly. These cookies ensure basic functionalities and security features of the website, anonymously.
Functional
Functional cookies help to perform certain functionalities like sharing the content of the website on social media platforms, collect feedbacks, and other third-party features.
Performance
Performance cookies are used to understand and analyze the key performance indexes of the website which helps in delivering a better user experience for the visitors.
Analytics
Analytical cookies are used to understand how visitors interact with the website. These cookies help provide information on metrics the number of visitors, bounce rate, traffic source, etc.
Advertisement
Advertisement cookies are used to provide visitors with relevant ads and marketing campaigns. These cookies track visitors across websites and collect information to provide customized ads.
Others
Other uncategorized cookies are those that are being analyzed and have not been classified into a category as yet.
SAVE & ACCEPT